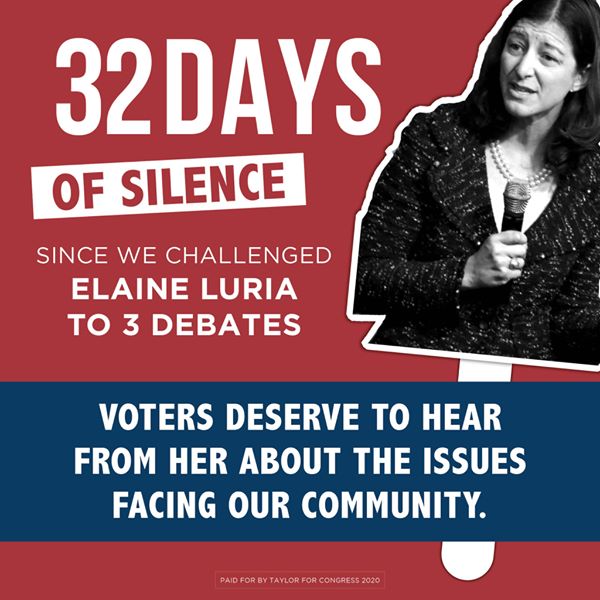 [Note: VPAP consolidated multiple ads with similar messaging]
Won't debate and discuss the issues or her record. She would not commit to the President of Hampton Roads Chamber, who asked her in person, either. You see TV commercials on how great she is and how she was the best Commander the Navy has ever seen, but now, she is hiding from constituents, her record, and her horrible votes. There is not much honor, courage, and commitment in that. Single Payer Healthcare, Small business, Defund police, Covid in nursing homes, Schools closed, Cancel Culture, Her 90% voting record w/Pelosi & the AOC SQUAD, Voting to give herself $5mill in taxpayer money for her political campaigns. Why is she hiding? #VA02 #Virginia

I have challenged her to 3 debates, and she hasn't responded. The people of our district deserve to hear our views on the important issues of the day; like whether or not our kids should go back to school in person this Fall. Contact her campaign and give her your thoughts!

We challenged Elaine Luria to a debate over 30 days ago. Crickets. How can she represent our district effectively when she isn't willing to stand on a debate stage and discuss the issues. Now more than ever, we need to know where she stands on the issues. Sign our petition, share this with your friends and family, and let's pressure her to do the right thing and agree to debate.