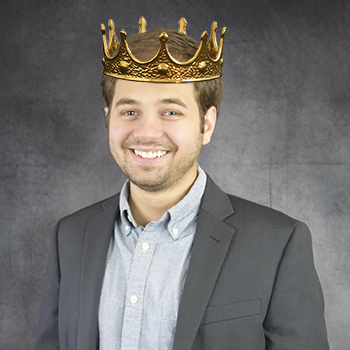 An active Republican from Culpeper, Christian Heiens did his part this fall to re-elect U.S. Rep. Dave Brat.

This put Christian, 24, in a tight spot when he sat down to predict the winning candidates in the 2018 VPAP Pundit Contest.

“I believe in a certain set of principles,” Christian says, “but I have to take off my partisan hat and put on my statistics hat.”

His switch paid off, and now Christian is sporting some fancy new headgear: the 2018 VPAP Pundit Crown.

“I looked at past races and where the trends have been going two, four or six years back,” he says.

Some, like picking Democrat Abigail Spanberger in the 7th district, were at odds with how he hoped the races would turn out.

“I predicted [Dave Brat] would lose, but not because I was hoping he would. I did everything I could to help,” Christian says.

More than 1,000 people entered this year’s contest. Christian was one of 45 who correctly guessed the winning candidate in all six races.

In the first tie-breaker, Christian and two other contestants guessed that Republican Corey Stewart would carry 80 of 133 Virginia localities – just shy of the actual total of 81.

“I looked at where he’d done best in the primaries this year and last year. I applied the same formula -- where are the places moving most?” Christian says. “Take James City County. [Ed] Gillespie barely carried it. I assumed Stewart would lose there.”

Christian sealed his victory in the second tie-breaker: In the 7th District race, what share of the vote would go to Libertarian Joe Walton?

“The Libertarian Party always wants to run a candidate in the 7th. In past years, they usually get two to three percent of the vote,” said Christian.

For aspiring pundits who came up short this year, Christian has some advice.