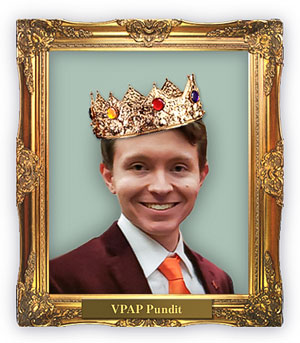 Sensing the future doesn’t just happen in a galaxy far, far away. It also happens in Roanoke.

His political footing was not formed on campaigns but behind the scenes. As a graduate student in public administration at Virginia Tech, Matt just finished an internship at the General Assembly and previously worked in U.S. Senator Mark Warner’s office.

The force was with Matt when he decided to enter the pundit contest Tuesday.

“To be honest, I wasn’t gonna do it all. When y’all first sent it out, there were so many candidates still in, I was like, I’m never gonna be able to get this correctly,” said Jones.

“Then Sunday and Monday happened and everybody and their brother dropped out.”

Wielding his political sense like a lightsaber, Matt bested 799 entrants.

He correctly predicted the outcomes of the five multiple-choice questions. Joe Biden swept Virginia with 53% of the vote. Bernie Sanders came in second place.

“A couple weeks prior, I was looking at how much support Buttigieg had in other parts of the state compared with Biden. Then with Buttigieg’s drop-out, I kind of figured that a lot of that support would swing to Biden,” said Jones. “And, you know, the voters in Northern Virginia are probably the most tuned in the country, so I didn’t see them voting for Sanders.”

Matt was tied with 124 hopefuls who had made the same guesses. He clenched his win with the first tiebreaker, which asked contestants to predict the percentage of the vote Bernie Sanders would receive in Sen. Mark Warner’s home precinct in Old Town Alexandria.

The estimates ranged from zero to the high eighties. Matt’s answer, 15%, was the closest to the 14.98% Sanders got on Super Tuesday.

“Honestly, I really just threw a number out,” said Jones.

After following VPAP for a year, compelled to enter his first pundit contest on a whim, some might wonder if the last Jedi is really in Virginia.