"Many candidates receive donations from PACs and SuperPACs, but the money is hard to trace. Can you do a visualization on PAC giving?"

You are correct – many candidates receive a substantial portion of campaign money via political committees.

In last year’s General Assembly elections, giving by political committees represented just over half of the $54 million raised.

By definition, a PAC pools money from multiple donors and then redistributes them. If a candidate receives a donation from, say, the Virginia Nurse's Association PAC, the public has a pretty good idea of the money's source.

All PACs -- even the so-called federal “Super PACs” – are required to disclose where they get their money. But there’s no easy way to draw a bright line from money a PAC receives to money that a PAC distributes to a candidate. But that is not becuase PACs are doing anything illegal or even dodgy; that is just what a PAC does – aggregate and distribute money.

The chart below breaks down the $54 million donations reported in 2015 by General Assembly candidates into three categories: 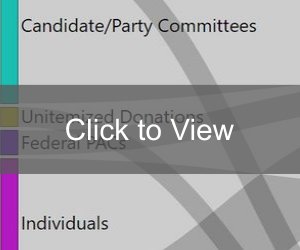 Want to suggest a data visualization?