Record Number of Delegates Seeking to Move Up

A record number of delegates are giving it a go for Governor, Lt. Governor or Attorney General.

Statewide bids by members of the House of Delegates: 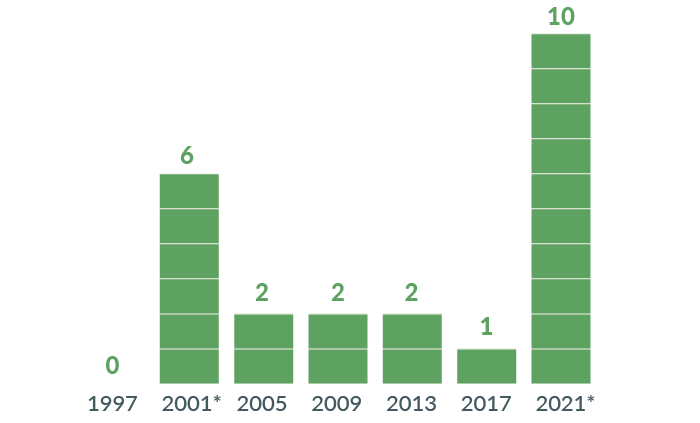 Ten Delegates give it a go 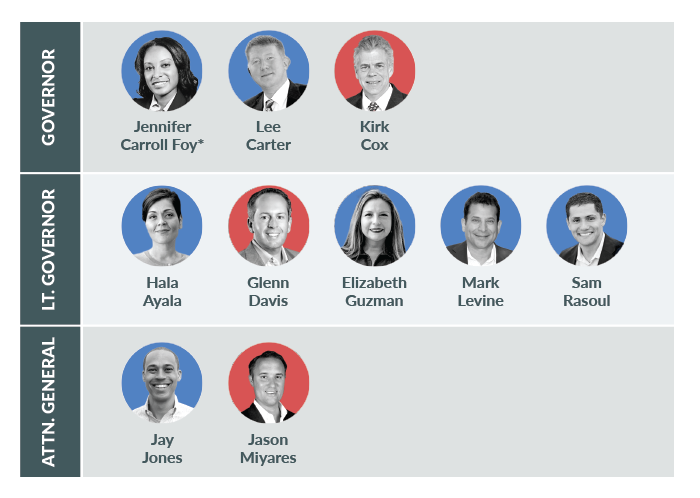 2001: Jay Katzen, Alan Diamonstein, Jerrauld Jones, Jeannemarie Devolites Davis for Lt. Governor; Whitt Clement and Donald McEachin for Attorney General. (Devolites Davis withdrew in time to run for re-election to the House that fall; Jones ran and won re-election in the House. The remaining four gave up their house seats.

2009: Brian Moran for Governor and Steve Shannon for Attorney General (Both gave up their House seats)

2013: Scott Lingamfelter for Lt. Governor; Rob Bell for Attorney General (Both managed to run and win re-election to the House that fall)

2017: Glenn Davis for Lt. Governor (Davis won re-election to the House that fall)

2021: Jennifer Carroll Foy resigned her House seat in December to focus on her bid for Governor.

CORRECTION:The original version of this visual published 1/13/2021 incorrectly that in most years delegates put their House seats at risk by running for Governor, Lt. Governor and Attorney General. That is not the case. A state law passed in 2004 gives candidates seeking nomination to statewide office the option of having their names printed on the ballot for two offices in the same primary election. So, unless some candidates were operating under the same false assumption that underpinned VPAP's visual on Wednesday, the prospect of staggered primary elections this year (statewide in June; House in August) has nothing to do with the fact that a record nine delegates are running for statewide office.

The visual also failed to note that in recent days reports about continued delays at the Census Bureau suggest it is far more likely that Virginia will not receive updated population numbers in time for Virginia to hold House elections in new district boundaries this November. If so, there would be no need to stagger primaries so that House candidates would have until August to qualify for the November ballot, as was the case in 2001 and 2011.

At VPAP, our mission is to enhance public understanding of Virginia politics with reliable, fact-based information. In this case, we fell short of our standards. We apologize for any misunderstanding.