A three-judge panel overseeing the recount in House District 94 accepted one additional ballot that resulted in a tie, meaning the State Board of Elections will determine the winner by drawing a name out of a hat. With the House divided 50-R, 49-D, the drawing also will determine which political party controls the House.

The ballot in question was rejected Tuesday during the recount because the voter marked the bubbles next to the names of both Republican Del. David Yancey and Democratic challenger Shelly Simonds. On Wednesday, lawyers for Yancey asked the judicial panel overseeing the recount to reconsider the ballot, which included a small slash across the bubble next to Simonds' name. Yancey's attorneys argued the slash was a clarifying mark that indicated the voter's intent to vote for the Republican. 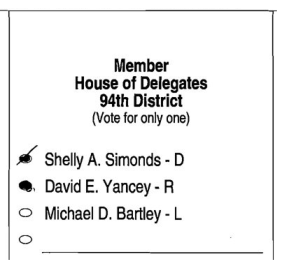 A three-judge panel agreed, which gave Yancey one extra vote and created a tie with Simonds.

The rejected-then-approved ballot is not an exact match for any of the 130 examples of disputed paper ballots developed by the State Department of Elections to provide guidance on which paper ballots should be counted -- and which should be set aside.

Two examples below appear to be somewhat similar. The voter filled in bubbles next to more than one candidate's name and added a mark -- an arrow in one and a circle in another. State guidelines say these particiular "clarifying" marks are sufficient to determine voter intent: 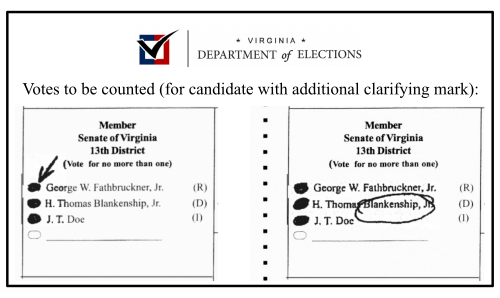 Second, the State Board of Elections will schedule a public meeting where it will determine the winner by drawing a name out of a container -- either a hat, bowl or box.

The outcome will determine which party controls the House of Delegates. The current split is 50 Republicans, 49 Democrats.