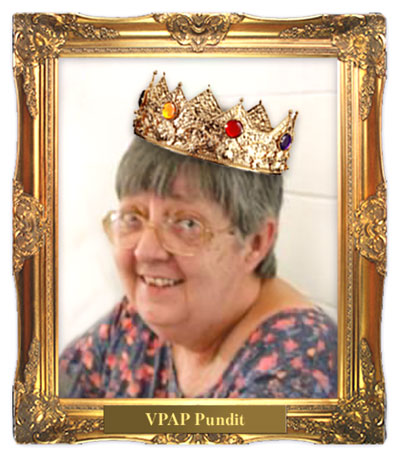 Sharon, 64, has lived in Lovingston, the seat of rural Nelson County, for 30 years. During that time, local politics have been a common thread.

These days, she works for the Blue Ridge Environmental Defense League. “A while back” she was the chair of the Nelson County Democratic Committee, Sharon said. But even before that, she grew up in Loudoun County, just outside of the 5th Congressional District where she now lives.

Sharon’s knowledge of Nelson County and the “really difficult” congressional district it’s a part of helped her thread the needle. She bested 395 hopefuls who entered VPAP’s June Primary Pundit contest.

Perhaps the news of her win should have come as less of a surprise to her.

“I don’t know how I did that, but okay!,” Sharon said, nearly in stitches when she heard. “Right now, I couldn’t even tell you who I picked, honestly.”

A self-described “political junkie” who’s followed VPAP a long time, Sharon was one of 44 who correctly guessed the winners of the primaries in VPAP’s semi-annual quiz. One of those correct predictions was in the 5th Congressional District, where Sharon lives. She correctly guessed Dr. Cameron Webb would beat three opponents.

“That was really a personal preference,” Sharon said. “I thought it would be a much closer race than it was. I was really surprised that he won by the margin that he won by, but I think it’s really good, too.”

In the first-tiebreaker, Sharon’s home-field advantage also gave her an edge. Contestants were asked to predict whether there would be more Republican or Democratic primary votes in the Rockfish precinct in Nelson County, where Rep. Denver Riggleman resides.

“I don’t vote in that precinct, but I know the county pretty well,” Sharon said. “So it made sense to me that in Rockfish they would choose more Democratic ballots than Republican ballots. It’s changed some, but generally, we have a decent chance of Democrats winning here.”

Sharon’s local knowledge propelled her (along with 16 other contestants) to the second tiebreaker: Predict statewide percentage of Republican votes cast by mail.

“I felt like, with the pandemic, that the absentee votes would be up a little bit,” she said.

“We even considered voting absentee, my husband and I,” Sharon said. “It was a consideration for us, so I thought a lot of other people might do that too.”

Recent winners have relied upon data and statistical analysis. Sharon — who likes things that are “very old school for this old woman” — stitched together a winning entry using local knowledge and common sense.