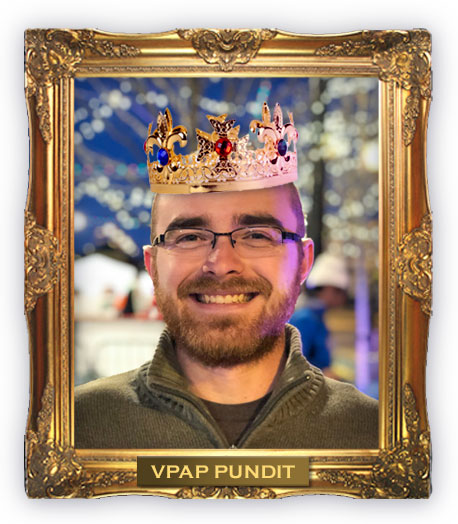 As a data analyst for Chesterfield County Fire Department, he studies trends to determine, say, where oven fires are most likely to occur. His spatial analysis helps the department improve response times for 911 calls.

In his past attempts at VPAP’s Pundit Contest, Jack took the same statistical approach he brings to his job. But he got burnt.

Unbound by the rows and columns of a spreadsheet, Jack set his intuition free. And now he wears the 2020 VPAP Pundit crown.

His “gut feelings” helped him fire away 13 perfect predictions, plus a win-clinching tiebreaker.

Jack bested 748 other contestants, more than two-thirds of whom were eliminated when they predicted that Democrat Cameron Webb would beat Republican Bob Good in the 5th Congressional District.

If Jack had taken an analytical approach, he might have fallen into the same trap.

Instead, he drew upon his experience of growing up in rural Alleghany County along the West Virginia border.

“I tried to envision the people that I know from where I grew up and how they would see these candidates,” said Jack. “I really played off my upbringing to see that [in the 5th Congressional District] Good was probably more in line with the majority of voters.”

After the round of Congressional elections, 81 contestants were still in the game. Like Jack, most safely navigated the outcome of the constitutional amendment setting up a bipartisan redistricting commission and local casino gambling measures in Bristol and Norfolk.

It was the final ballot question — a proposal to relocate a Confederate monument from courthouse grounds in Warren County — that cut the field in half.

For Jack, no number-crunching was necessary.

“I didn’t see any of those Confederate monument things [passing], especially when you get on into rural Virginia,” he said. “I know growing up, everyone idolized them, and right or wrong, it’s going to be too hard to overcome the partisan lean of that issue.”

The final trial by fire for the remaining 41 hopefuls had to predict the outcomes of four local races. Again, Jack drew upon local knowledge to navigate one of them.

“I live in Richmond, so I was probably most invested in the mayoral race” of everything on the November ballot, Jack said.

At the end, Jack and one other contestant  got all 13 questions correct. Jack kept his flame burning on the tiebreaker: What percentage of votes cast in-person on Election Day in Virginia will go to Donald Trump?

His instinct got him the win — no spreadsheet necessary.

“I know VPAP had a chart” detailing early voting stats, Jack said, sounding modest. “Maybe I gleaned something from that subconsciously.”

His mental fitness may get a boost from his Geography degree from Virginia Tech. The deep breaths required to stay calm through the Pundit Contest can be credited to his background as an aerobic endurance athlete, running and biking with his fiancée in his spare time.

And he’s not a hot head. He begins a gracious reign as Pundit with these final words: